With the goal to benefit U.S workers, boost economy and help distressed areas, The Congress of the United States introduced the EB-5 Investor Visa program nearly 30 years ago in order to facilitate the flow of foreign investments into the country and promote the expansion of employment opportunities. Under the EB-5 program, investors making the required capital investment in a commercial enterprise and creating at least 10 full-time jobs for qualified American workers will be eligible to apply for permanent residency in the United States.
Once EB-5 investor is obtained, investors and their immediate families are able to obtain conditional residency in two years, followed by a Green Card allowing them to live, work and retire in the United States. US Residents are able to enjoy a handful of benefits including:

It is also worth mentioning, that the new rules consisted of a clearer outline of how Targeted Employment Areas are determined to ensure fairness and consistency. According to the Department of Homeland Security and as of the effective date of the final rule, States will no longer be able to designate certain geographic and political subdivisions as high-unemployment areas; designations will be done directly by the DHS in order to adhere with the congressional goal of funneling the investment to areas most in need.
New EB-5 regulations will be effective on the 21st of November 2019. Applicants considering this investor visa program are strongly advised to contact Bluemina Citizenship and Residency at their earliest convenience before the increase of $400,000 in required investment takes place.  Bluemina’s team of expert consultants will assist you in locating a pre-approved business project via the EB-5 Regional Center Scheme and will guide you through every step of your application till your EB-5 immigrant visa is issued 18 months later.

We look forward to guiding you on your path to become a global citizen. 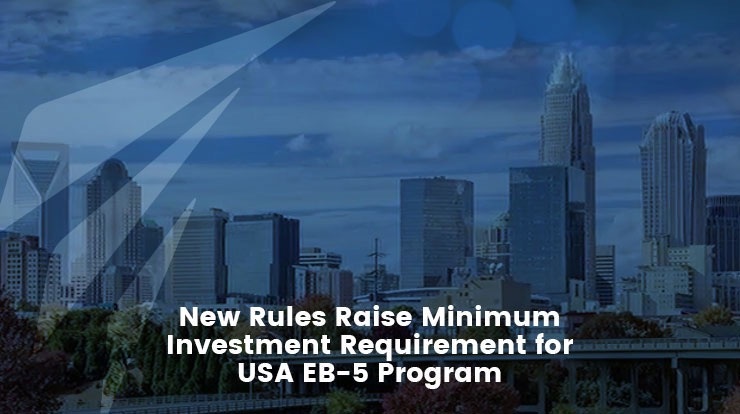